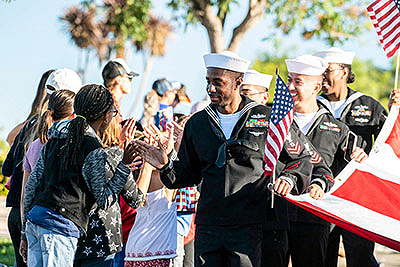 It began as Armistice Day: The 11th day of the 11th month. It marked the end of World War I, and was first observed a century ago.

In 1954, President Eisenhower signed legislation to change Armistice Day to Veterans Day, creating a federal holiday that honors all our nation’s veterans, from war and peacetime, every November 11.

Bank of America Merchant Services is honored to include veterans of our nation’s military among our employees. Military veterans bring to the workforce a unique combination of experience and training that sets them apart from the rest of the population. The company’s Military Affinity Group, open to veterans and non-veteran employees, offers recruiting events, volunteer activities, and the opportunity for veterans to bond with one another.

In honor of Veterans Day, we spoke with three military veterans who are part of the Bank of America Merchant Services family. They told us about their military experience and how it’s helped form who they are and how they pursue their careers.

As the only girl among five siblings, with a dad and three brothers who’d served in the military, it was clear to Lynne Bever that she would probably serve, too. “I knew it was in my future,” she said. And her dad made the choice a bit simpler: “In my family, dad gave us ‘the talk’ when we were 16,” Lynne says. But in her case, “the talk” wasn’t about the birds and the bees. “When my brothers and I turned 16, our dad would say to us ‘You’ve got to start thinking about what you’re going to do with your life, because you won’t be living in my house once you turn 18.’” Lynne credits her parents for instilling a strong sense of independence and self-reliance that has served her well through the years.

So at age 17, Lynne enlisted in the U.S. Navy. “I started at the bottom,” she says. The young recruit experienced aspects of life she’d never contemplated. “After boot camp, I was assigned to a Cryptology Unit stationed in Honolulu [Navy Cryptology supports the national intelligence gathering effort]. Not only had I never left Florida—I’d never been on a plane!”

Before long, Lynne was approached by a career counselor, who asked if she was interested in becoming an officer. Fast forward 15 months, and Lynne, at this point a Petty Officer, was heading to the United States Naval Academy, an elite school that trains future officers. “It was challenging and rewarding—and one of the things in my life I would definitely do again,” she says. While at the Academy, Lynne served as captain of the women’s crew team, and earned a degree in Ocean Engineering.

Things changed in 1990, when the Gulf War broke out and Lynne was ordered to Saudi Arabia to lead a team of more than 100 Navy doctors, nurses, Corpsmen and Seabees in the erection and maintenance of a 500-bed combat zone fleet hospital.

Lynne ultimately made the decision to leave the Navy after the war and 13 years of service. But she didn’t rest on her laurels—she attended the University of Pennsylvania Wharton School of Business, graduating with an MBA in Finance. Her path then led to 18 months as a financial analyst at Ryder Systems, followed by a move to Arby’s where she worked in both Operations and Finance, and then to First Data (now Fiserv) as a National Relationship Manager more than 13 years ago. She is now with Bank of America Merchant Services, and serves as a VP/Service Manager in Large Corporate.

Reflecting on her military service, Lynne says “It shaped who I am. I was only 17 when I joined the Navy—I was still malleable. Before I went to boot camp, I’d never been away from home. But while I was in the Navy, I saw the world.” Her experiences created in Lynne a drive to excel and a desire to see tangible results. “The two most important lessons I learned in the Navy were first, to promise less and deliver more; and second, to praise in public but criticize in private.” Lynne believes there’s no higher honor than service to country, and she encourages young people from all walks of life to join the military and experience the excitement and challenges it offers.

Veterans Day is a time when Lynne reflects on her military experience and the men and women in uniform around the world. “They and their families make a huge sacrifice,” Lynne says. “I think about how hard it can be for them, and I pray for their safety and success. I hope our country gives them all the support they need.”

If not for the fact that his daily walk to class took him past a military recruiting office, Mario Villacres’ life might have taken a different turn.

Born and raised in Washington, D.C., Mario moved to Puerto Rico after high school, living with his grandmother while he attended college. “I’d walk past the recruiting office every day, and the officer in charge would strike up a conversation with me,” Mario says. The two developed a friendship, and eventually, at age 21, Mario decided to enlist in the Army.

Upon joining the Army, Mario left the tropical climate of Puerto Rico for the less-lush environment of Fort Dix, NJ for basic training. After that, he was sent to Fort Hood, TX. Mario laughs and says “My first thought was ‘Texas? Will there be cowboys and horses?’” He didn’t see any cowboys, but he worked with Apaches (Apache helicopters, that is). “I had lots of friends there—it was a great time,” he says.

In 1994, Mario was assigned to duty in Schweinfurt, Germany, where he worked as a generator mechanic and electrician attached to the motor pool. The duty was a bit more difficult than it was in Texas. “I was part of a support battalion, and we had to spend 280 days a year in the field, helping troops who were doing three weeks of combat training,” Mario says.

In 1995, Mario was a member of one of the first units to jump into Bosnia when the U.S. helped to quell fighting there. “It was rough,” Mario says. “I was part of a medical battalion, and we saw a lot of casualties.”

Mario left the Army in 2000, eventually moving back to Austin, Texas. “I moved from Austin to Tyler, TX, but I decided it was too small. So I moved to Dallas,” he says. He joined First America Payments Systems in 2003, then went to Lowe’s for a positon in district sales. Mario joined Bank of America Merchant Services in January 2018, and now serves as national sales manager, Franchise Client Management. He’s still in Dallas, and he’s married with two daughters and a third on the way.

When he reflects on Veterans Day, Mario thinks about those who are currently serving, as well as those who never came home. “A lot of people gave their lives because they chose to serve,” Mario says. Speaking of those on duty today, he says “I hold them in the highest regard. I know they’re not concerned about their own welfare, but about the person serving next to them. They want to make sure that person gets home safe.”

Community college just wasn’t doing it for him, and Diego Duque decided he needed a new challenge. So he visited the local U.S. Marine Corps recruiting office.

“I felt that the Marines were the best fit for me,” Diego says. “I liked to challenge myself, and I knew that the Marines are always the first to fight.” Diego was just 19, and in February 1988 he started boot camp.

Diego was then assigned to Camp Lejeune, NC, where he underwent weapons and combat training, becoming an antitank missile operator. “I was part of a TOW company (Tube-launched, Optically tracked, Wire-guided missiles),” Diego says.

That training served a purpose after Iraq invaded Kuwait in 1990, and Diego was deployed to Saudi Arabia in preparation for the first Gulf War. Diego was part of the Marine force that helped repel Saddam Hussein’s army and liberate Kuwait. “Our first day, we breached a sand berm and found ourselves crossing a series of minefields,” Diego says. “It was chaotic, with artillery and gunfire.”

Diego remembers being grateful for his months of combat training as his unit fought the enemy. “Combat felt like a training exercise, except this time, there were real bullets. I can remember feeling the heat from nearby explosions,” he says.

After a prolonged period of fighting, Diego’s unit stopped outside Kuwait City while the conflict wore down. “Even though there was a ceasefire, we still needed to be there. So we spent what seemed like forever just keeping busy and moving from place to place,” he says. In total, his unit was in the Middle East for more than six months.

After leaving the Marine Corps in 1992, Diego settled in Miami and joined the Reserves, and started working in financial services for Discover, later moving into the company’s merchant services division. He’s been with Bank of America Merchant Services for more than 16 years, currently serving as regional leader, Small Business for the Southeast region.

“The Marine Corps changed me forever,” Diego says. “From the day I graduated boot camp, I knew there would never be a challenge I couldn’t face. I learned that, when there’s an obstacle in my way, I’d either climb over it, go around it, dig under it, or break through it—but giving up was NOT an option.”

The Corps also instilled in Diego important characteristics like discipline and leadership. “I learned to respect authority, but trust my instincts, and to be decisive during chaos. That’s helped me in my career,” he says. “I also learned that a unit is only as strong as its weakest link. Everyone’s job is as important as the rest, and no one is left behind. This is something I’ve instilled in my team, which is why we’re so strong.”

When he thinks about Veterans Day, Diego says he’s glad that our nation celebrates and honors its veterans. “There’s a lot of awareness and acceptance of veterans than there used to be,” he says, adding that he’s proud to be among their ranks. “When I travel with my family, I see veterans of all ages, and they’re all special.”

On Veterans Day and every day, Bank of America Merchant Services salutes our military veterans, and thanks them for their service to our country.